Guess Which Generation Is Making The Biggest Comeback In Real Estate

Doc Martens are back in fashion, this time on the shelves at Nordstrom. Hollywood starlets sport ’90s choker necklaces and Nirvana T-shirts. And guess what? Generation X home buyers are making their comeback, too.

Gen X may not be getting as much attention these days as the (forever) up-and-coming millennial generation, but it’s making its mark on the housing market as the only generation to buy more homes last year than it did in the previous one, according to the latest National Association of Realtors® Home Buyer and Seller Generational Trends survey. Nearly 5,500 home buyers who purchased a house between July 2015 and June 2016 answered the 132-question survey. Their responses were compared with results from the previous 12-month period.

The folks once labeled as slackers, now aged 37 to 51, went from making up just 26% of home buyers to purchasing about 28% of properties.

“That group suffered the most” in the last recession, says Chief Economist Jonathan Smoke of realtor.com®. “They were entering homeownership at the peak of the housing bubble and were also the ones most likely to suffer job losses.”

Why Gen Xers are back big-time

In fact, Gen Xers are the largest generation with the kids still living at home, says Jessica Lautz, NAR’s managing director of survey research. So “they may be moving for a better school district or into a home that just has an extra bedroom to accommodate their children,” she says.

And they also happen to be the group making the most money these days. All the better to be able to afford that four-bedroom, 2.5-bath stunner with killer views and a hot tub out back.

In addition, low mortgage interest rates have also spurred Gen Xers (along with everyone else) into the market, says Realtor® Judy Dooley of Nebraska Realty, based in Omaha, NE.

“We’re seeing people get out of their current houses and shopping around to get a bigger and more expensive house,” she says. “Their children are getting older and maybe moving on to college. They might be wanting to … move into something like a ranch-style house or maybe a smaller house with more amenities.”

Gen Xers may be the only age group buying more homes than they did a year ago. But they’re not buying the most homes. That distinction goes to millennials, who make up a much larger swath of the population.

“The millennials are a sleeping giant,” says public policy professor Dowell Myers at the University of Southern California in Los Angeles. “They should be big home buyers over the next five years as long as the credit markets are willing and the supply [of available properties] exists.”

Who’s buying where? The answer just might surprise you

Despite all the buzz about millennials loving big-city life, more are trading their cramped urban apartments for life in the suburbs. It’s actually baby boomers who are buying the most urban abodes. They’re the ones with the most accumulated cash to be able to pull it off.

Meanwhile, 57% of them bought homes in the suburbs (as distinct from small towns or rural areas), compared with 51% a year earlier.

Better get used to this stark fact: Millennials are growing up.

“They act differently when they’re 30 than when they’re 25,” says Myers. “When they’re younger, they’re happy living in a two-bedroom apartment. When they’re 30, most have partners and have kids—or they’re planning to. That totally changes their housing needs.”

It’s also worth noting that many of the suburbs that they’re moving to aren’t what they used to be.

“Increasingly we’re seeing suburban communities transforming to include more urban-style amenities, because they want to attract the millennials,” says Lynn Richards, president and CEO of the Congress for the New Urbanism, a Washington, DC–based group focused on helping communities become more walkable.

In addition to walkability, these younger homeowners are on the prowl for “a choice of transportation and cultural amenities like fields for kickball, softball, and ultimate Frisbee as well as bars and music venues,” adds Richards.

Meanwhile, 22% of boomers bought homes in urban areas and 49% purchased homes in the suburbs. Older buyers are increasingly seeking to downsize from their bigger, single-family homes out in the sticks once their kids fly the coop and move into fun urban areas with tons of things to do as they veer toward retirement. 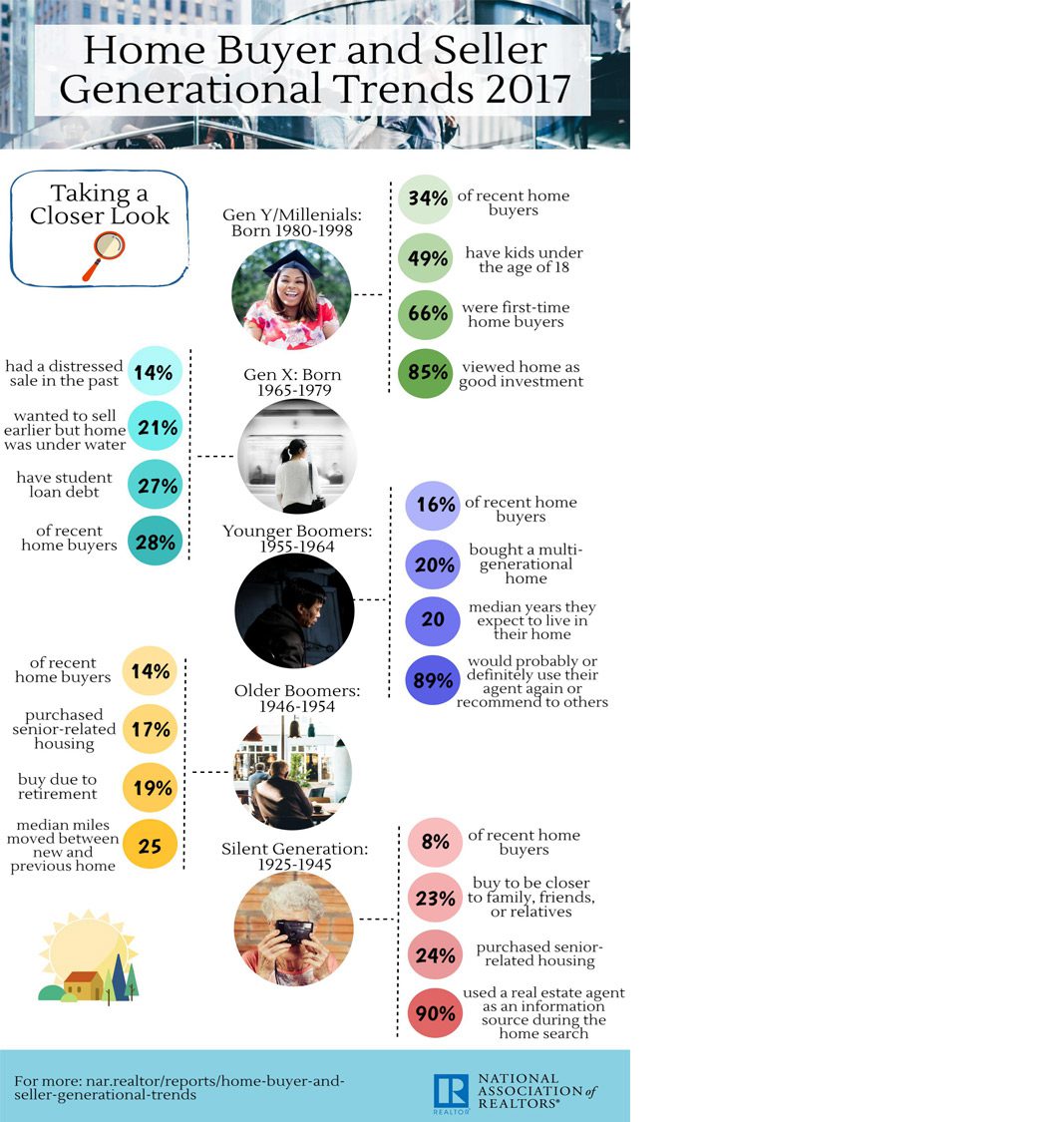 Another emerging trend: Baby boomers are now more likely to buy homes not just for themselves—but also for their aging parents and adult kids saddled with student debt.

About 20% of boomers bought a multigenerational home in the past year compared with 16% a year earlier. This is often a home with separate living quarters for their loved ones.

“With rising rents and rising home prices, it becomes increasingly difficult for the younger generations to live independently,”says NAR’s Lautz. “But living with parents could be a very good opportunity to save for their own down payment for a future home.”

And it makes more than just economic sense, says John Graham, co-author of “All in the Family: A Practical Guide to Successful Multigenerational Living.”

“The whole notion of two parents, a kid, a dog, and a white picket fence is going away,” he says. “Grandparents help with childcare. Teenage children help with elder care.” 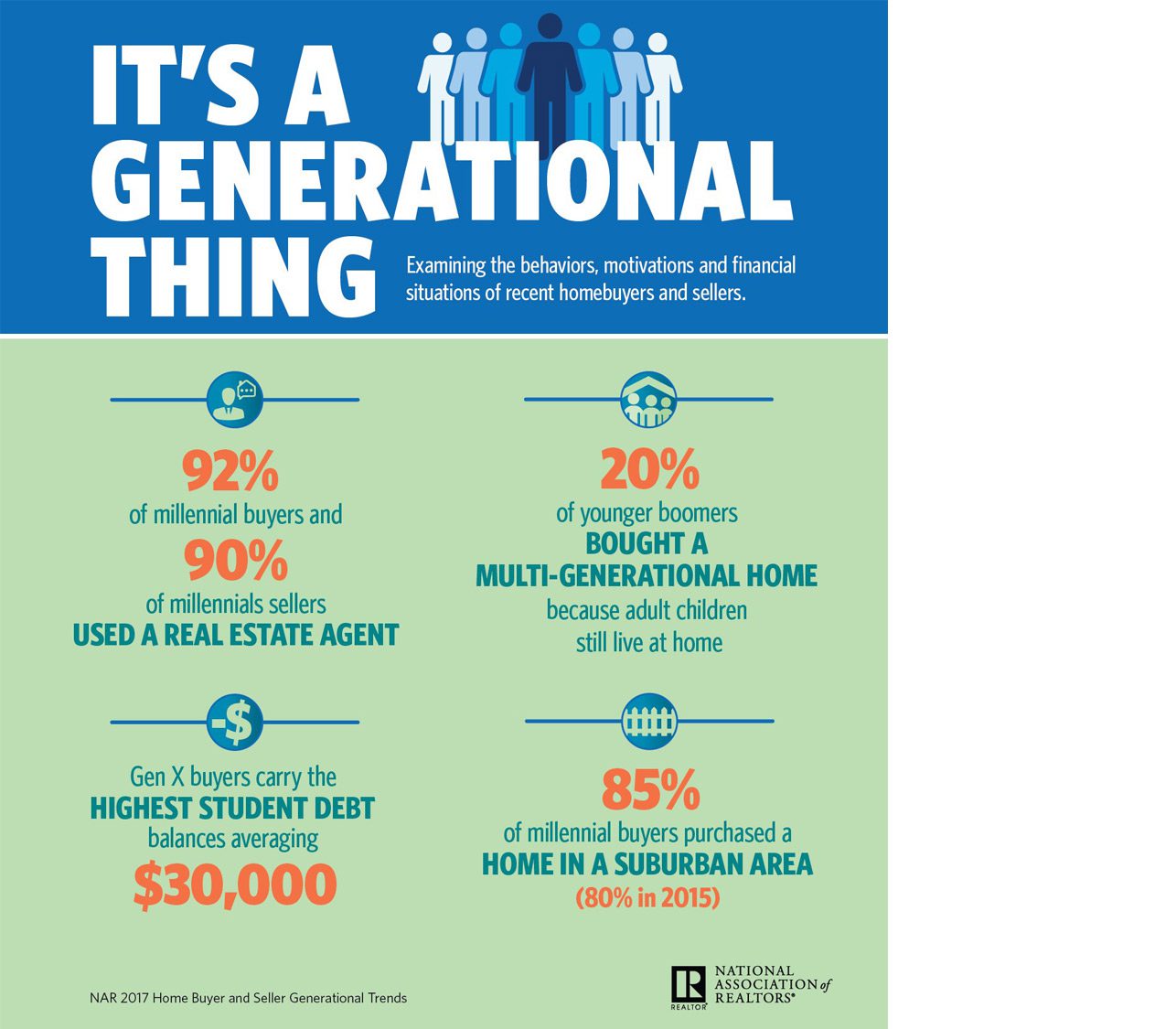 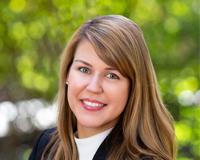 Kat Royer is a graduate of Virginia Tech with a Bachelor’s degree in Hospitality and Tourism Management and minor in Real Estate. She worked for 7 years in operations and sales for a major internat....

The pandemic has brought about changes to the housing market across our nation and we have definitely felt it locally. For the month of July, the change in the number of units sold in Frederick

How To Prepare Your House For Warmer Weather

Getting Your Home Ready for Warmer WeatherIt’s just around the corner friends and family...warm weather. I cannot wait to be sitting on my deck, cold drink in hand, and soak up the sun! But,

Should I Pay Over Appraised Value

I write these blogs to be really informative in regards to the local Frederick market. As a local agent, you should be getting local expertise and direction.So in the spirit of professionalism -

The Need For Affordable Housing

By registering, you agree to our terms of use and that real estate professionals and lenders may call/text you about your inquiry, which may involve use of automated means and prerecorded/artificial voices. You don't need to consent as a condition of buying any property, goods or services. Messages/data rates may apply.